I was talking to a friend recently, and he mentioned a friend who seems to only go for guys who are just past legal age, lean muscled, and white. I don't want to begrudge people for their "types" too much since I've had and STILL have my own types. But that got me thinking, and for once it's not about the unconscious biases we have and how that might affect attraction.

Instead, my thoughts were more positive: how kink has helped my preferences morph and be more open.

I think the first time I noticed this was when I saw bondage pics that were shot where a bald guy was the one dominating. Until that point, I had not been attracted to guys who were bald or had receding hairlines, but that triggered something with me. I found myself attracted not just regardless, but because of that. The same thing has happened other times with other "types" I wasn't attracted to before: guys who are fat, guys who are older, guys who are only slightly taller or even shorter than me, gingers... I've noticed similar things happening with women, too. The older I get, the more it becomes like a role-playing game, where I level my sexual attraction until I find more and more sexy people.

I'm not sure whether my bondage interests have helped me gain attraction or if it's there but not as loud if I didn't have that as a "cue" but I just find it interesting how many more people I want to do things with (or to). I no longer have a "type," really, unless you factor in that I drop someone like a bad habit if they aren't respectful to me or to my friends.

Has this happened to anyone else before?

I did some modeling for a new friend on Sunday. He and I share a fondness for the traditional rope + duct tape/bandana bondage that is usually the sort of thing you see on TV, in movies, etc. As I've mentioned before, that is what got me interested in bondage to begin with. 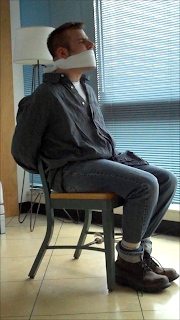 One of the nice things about doing my modeling thing was, on top of having some nice pictures, I got to be tied up like the heroes I saw growing up. I first discovered I was interested in bondage from when I was really young, and I had no interest in sex. Bondage WAS sex. It was strange that I was so turned on by it, but it interested me.

During this year, I experimented with a lot of different ways of being tied and tormented. My friends and contacts lists grew exponentially. My calendar was booked. Things were constantly in motion, both sexually and in my personal life. Everything zoomed by.

So it felt good to return to my kinks in their purest form. With all of this change going on in my life, it's good to know I am still rooted and have things that still are a part of me. I've learned this year that I need to take action to solve some of the biggest problems in my life.

But sometimes I just need to be still.

Happy and safe playing, everyone.

One thing I've been vocal about with my friends and that I'm unashamed of mentioning to people (however ironically, considering...) is that I have social anxiety. While I can actually do well with acting and even speeches since there's a level of performance involved, being me in public used to be debilitating. I have become better at this, but there are still moments of struggle.

Becoming more active in the Kink World, so to speak, has helped me overcome some of these hurdles. I don't find it very surprising that part of the appeal of bondage may be the fact that it forces me into a position and there's no way of escaping it, or (on the other hand) I am scared of things and being secured like that helps keep me away from what is bothering me. I could be an armchair psychologist for a whole post about this, but I don't think that makes for terribly interesting material. MORE SEX.

At IML this year, my first year ever, there were two experiences which forced me into being in the public. I would say that both of them were transcendent, resulting in a weekend in which I returned to normalcy a completely different person than how I started out. This is what transpired when I met up with a friend I had known for a few years...
Read more »
Posted by Unknown at 10:00 PM No comments:

One of the reasons I decided I would start my own public blog is because I had the honor of two stories being featured on Bob Wingate's Blog, i.e. the founder of Bound and Gagged magazine. He seemed to really enjoy both of the stories I submitted so I figured I would also share the first one here since it seems to be the perfect launching point.

While I had been tied up before this incident, this was the moment in which I realized "Yes, I like guys." Up until that point I thought I just wanted to be tied up by them, nothing sexual. I've talked to straight guys who have had a similar outlook - they don't get anything out of sex, but they do have this urge to try bondage with another guy. It'd be interesting to see whether women have felt the same towards other women, or whether this is a cultural thing, but for now I'll just share one of the first biggest steps I made towards embracing my sexuality.


It all started with Inspector Gadget.

There was something about how often Gadget's niece Penny got captured and bound and gagged by criminals that made me as a little kid (about 5 or 6) feel funny. Whenever an episode came on featuring this happening to her, I made sure to watch. I did the same for other cartoons and TV shows, and found myself looking for episodes of shows and movies involving kidnappings, just so I could possibly see someone else being restrained. I wanted it to happen to me so much.

Fast forward to the present, and I'm eyeing the collection of photos I've had from subbing. I figured it was high time, a year later, to start being more public about my misadventures and talk more about the thoughts I've had. Bondage, and kink in general, has become not just a way to get my kicks but also something that fascinated me intellectually. It's even helped me improve my life in ways I've never imagined possible.

So here I am. I'm 28 of writing this, bisexual but mostly indulging in kinky things with other guys, and have been active in being a kinkster since I nervously wrote someone (who is now a good friend) on Fetlife about meeting up. A lot has happened since that period of time, and I imagine a lot will happen later.

I really like feedback, so if you have any comments or ideas for posts or want to write your own, let me know. And yes, there will obviously be sexy pics.